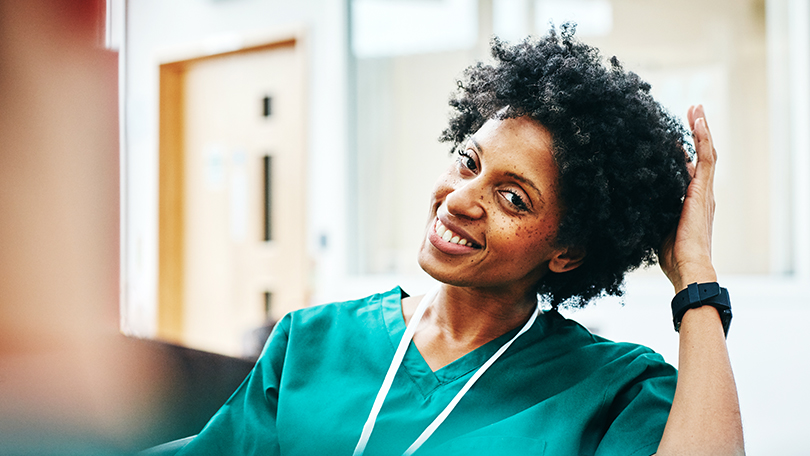 To better understand the changing landscape and emerging challenges of the nursing profession, RNnetwork recently conducted a follow-up study of its groundbreaking 2016 survey, which painted a portrait of a modern nurse and examined different aspects of the national nursing shortage. In this updated survey, respondents from around the United States shared perspectives about subjects including workload, the national nursing shortage, the nursing profession in general and respect in the workplace. New questions about mental health and self-care also yielded fresh insights into the day and life of a nurse.

The results revealed many of the concerning statistics from the previous study were either static or growing worse: nurse burnout, overwork and harassment continue to affect nurses and impact patient care in 2018. True to the problem-solving nature of their training, however, many participants want greater focus on possible solutions like temporary staffing or investment in new incentives and programs.

Nurse burnout is continually acknowledged as a particular problem in the medical profession, and as the nursing shortage continues, there seems to be no clear solution in sight. In 2018, 62 percent of nurses felt regularly burned out in their jobs, and 44 percent of nurses believed that burnout had affected their work performance.

Perhaps most pressing for the future, nearly half of all respondents (49 percent) had considered leaving nursing in the past two years, a number that has not changed since RNnetwork’s 2016 survey. Instead of work situations improving, 40 percent of nurses believe they have less free time now than compared to two years ago. A similarly-sized group (38 percent) felt their available free time had not changed in two years.

Additionally, in 2016, 63 percent of nurses felt they spent just the right amount of time at work, which dropped slightly to 60 percent in 2018, further indicating that hours and expectations are increasing.

The increasing national nursing shortage compounds all of the issues facing today’s nurses. The Bureau of Labor Statistics predicted that 1.2 million vacancies will emerge for registered nurses between 2014 and 2022, and the fallout of that widening gap is becoming significant. This outlook was confirmed by survey respondents, 91 percent of whom felt their hospital was understaffed.

This nursing shortage has negatively affected workloads for  88 percent of nurses in 2018, up significantly from 62 percent in 2016. Additionally, nearly 62 percent of respondents believed the shortage was negatively impacting the quality of care nurses could provide, with 46 percent feeling even more overworked than they did two years ago.

As public understanding of the value of mental health increases and long-held stigmas begin to fall away, the door is opening for conversations in workplaces. With such widespread mental health problems reported among nurses, it is also notable that only 16 percent reported meeting with a mental health professional over the demands of their work – but 47 percent wish they had better access in the workplace.

Bullying and harassment continues to be a problem

The prevalence of bullying and verbal harassment is a significant issue in the nursing industry. Nearly 40 percent of nurses reported being bullied or harassed during the past year.

Nurses face this abuse from many directions, and in all areas of their work: 30 percent of bullying or harassment comes from other nurses, 25 percent from patients, 23 percent from physicians and 22 percent from administrators. Although any amount of harassment is unacceptable, the data may indicate that instances of workplace hostility may be decreasing for nurses. In the 2016 report, 45 percent of nurses reported bullying by other nurses, 38 percent by physicians and 41 percent by administrators.

The data further indicates that 62 percent of nurses believe that physicians respect them, which is slightly lower than 2016 levels (65 percent). Unfortunately, only 29 percent of nurses felt respected by administrators, which was a significant decrease from 46 percent in 2016.

Free time is in short supply for most nurses. When compared to two years ago, 40 percent indicated they had less free time and 38 percent felt things were about the same. Fifteen percent saw a slight improvement and only seven percent saw any large increase in free time. 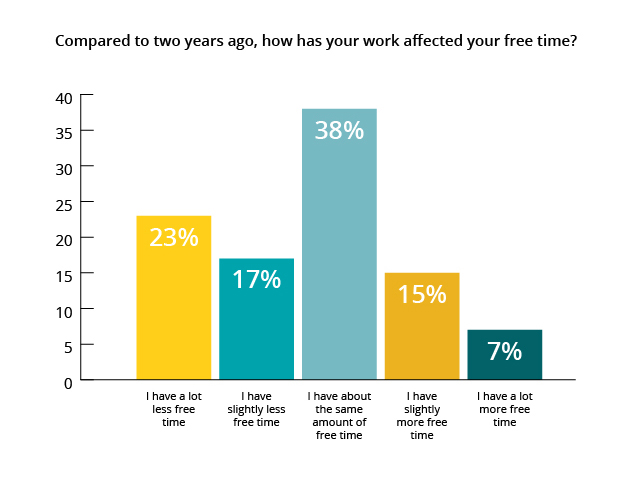 Overwork is a hallmark of burned out employees, and few have more time-intensive schedules than nurses. In the past two years, most nurses have either seen their workloads increase (46 percent) or stay about the same (32 percent). Just 22 percent of nurses felt their workloads had become less burdensome. 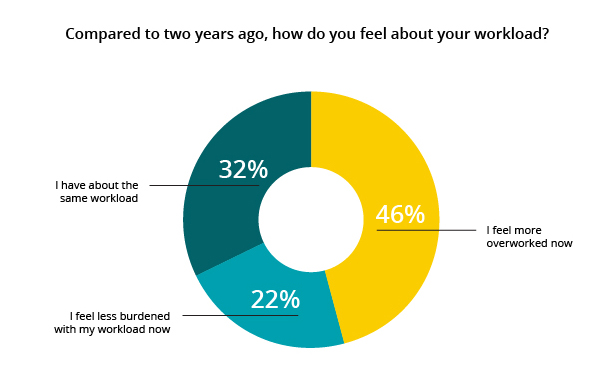 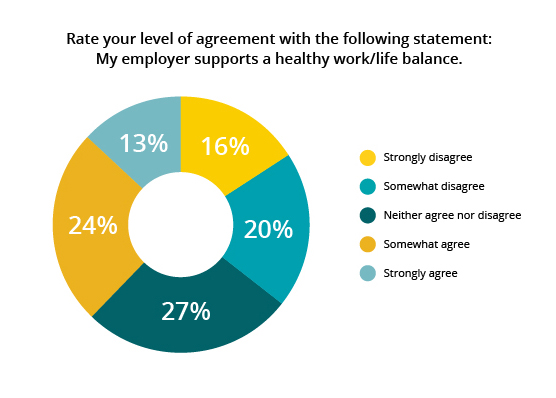 If there is any statistic that should spur administrators to action, it is that nearly half of nurses (49 percent) have considered leaving during the past two years. The top three reasons nurses considered abandoning the profession are overwork (24 percent), spending too much time entering data in EHR (19 percent) and not having enough time with patients (15 percent). In addition, 38 percent of nurses said they work second jobs to pay off debts (31 percent), to support their preferred lifestyle (17 percent), and because their income has decreased (15 percent). 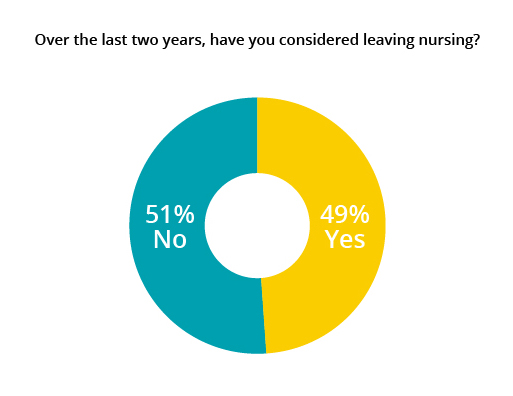 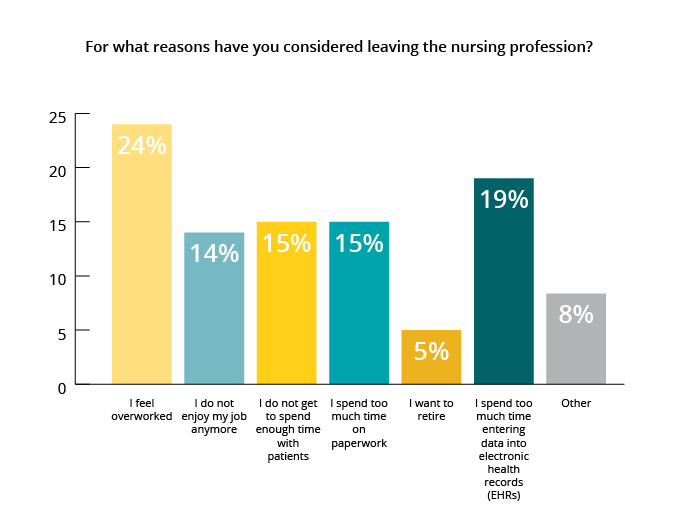 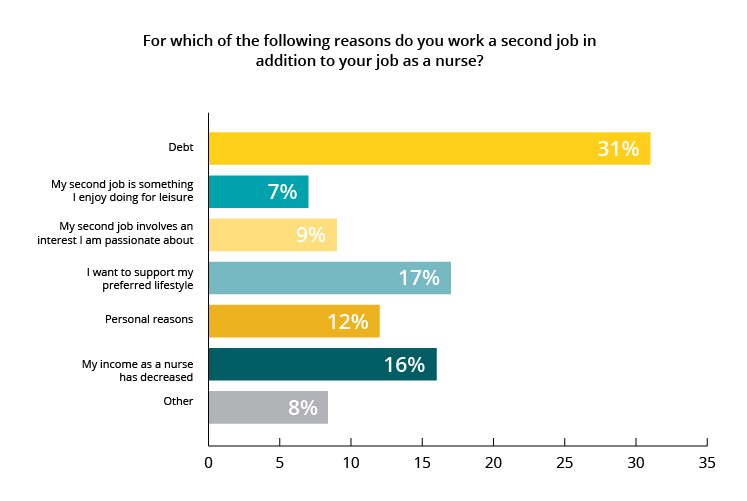 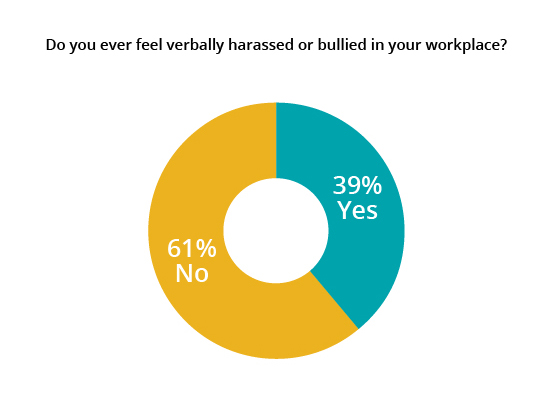 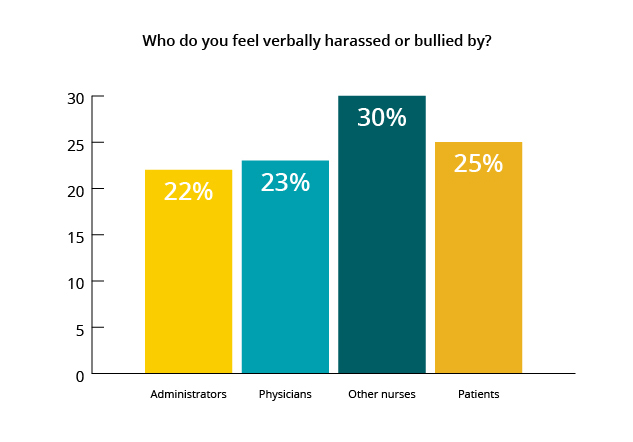 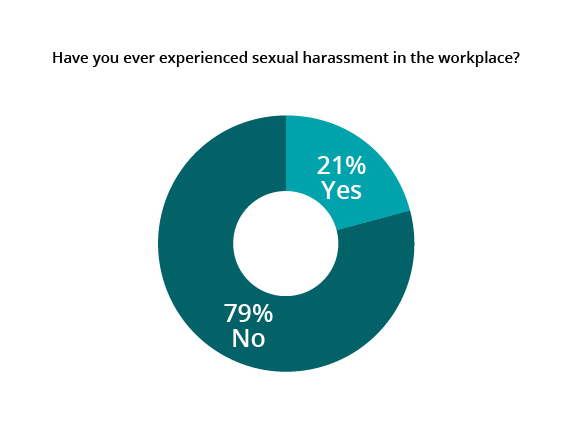 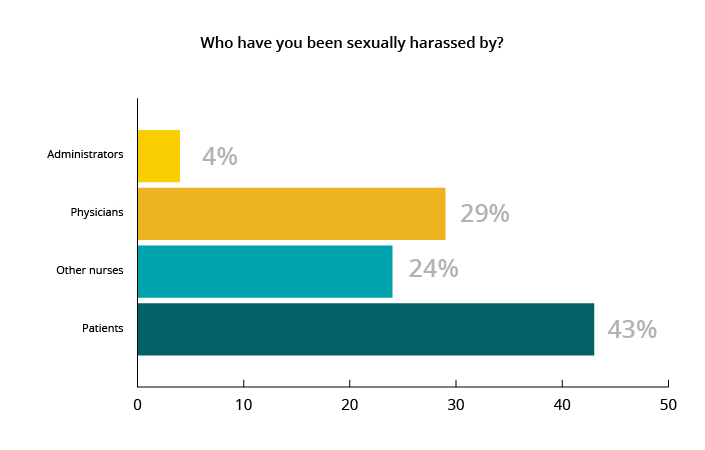 Eighty percent of respondents believe there is a nursing shortage in their facility, and 76 percent report they have personally been impacted by the shortage. Eighty-eight percent of nurses have seen their workloads increase due to fewer nurses in the industry. 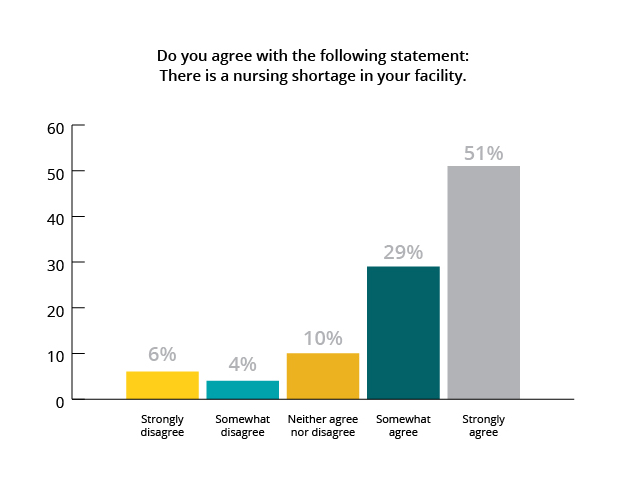 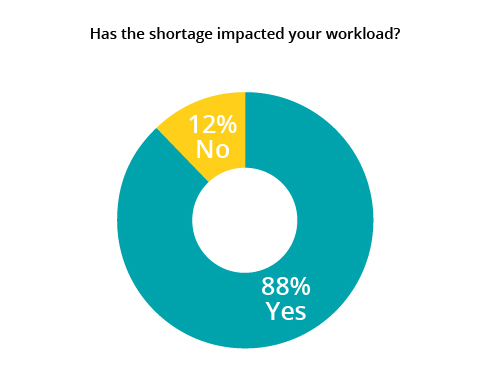 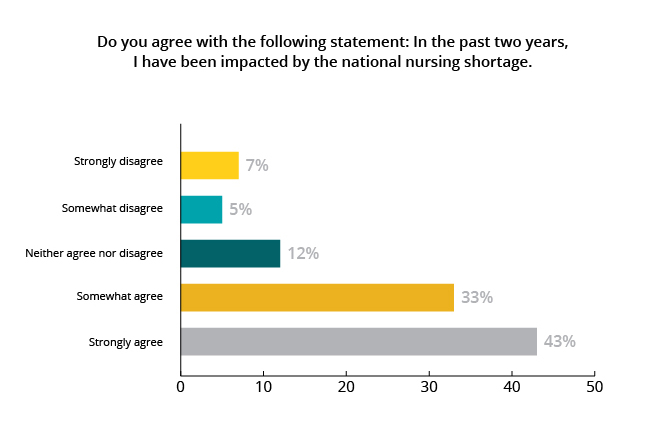 Nurse burnout is a major problem, with 62 percent feeling burned out on a regular basis, compared to only 22 percent believing it wasn’t an issue. Burnout reportedly affected work performance for 43 percent of respondents, while 35 percent believed burnout had no impact on performance. 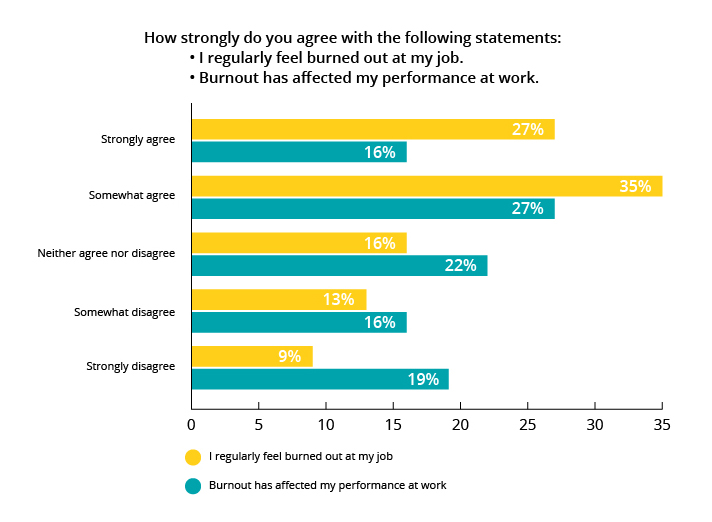 Nurse burnout is also taking a toll on physical and mental well-being, with nurses reporting symptoms of chronic fatigue (16 percent), anxiety (13 percent), insomnia (11 percent), and depression (9 percent) due to burnout. 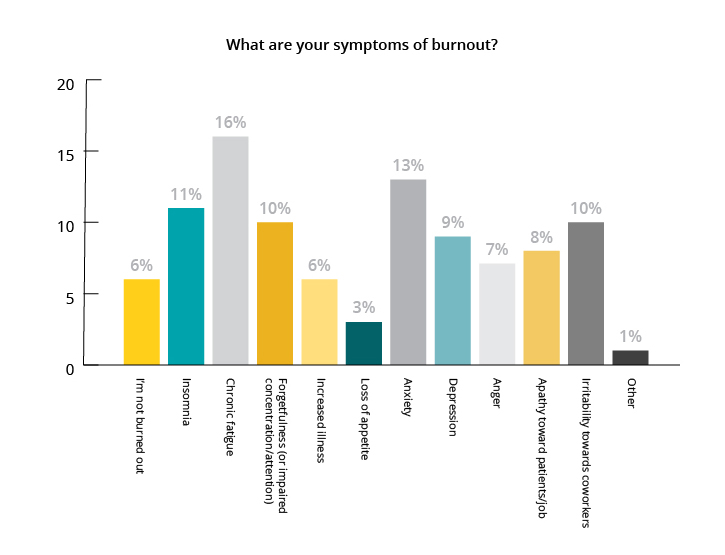 The vast majority of nurses also reported going into work sick at some point, with 85 percent of respondents admitting to it. More than half (54 percent) believed that burnout contributed to their sickness. 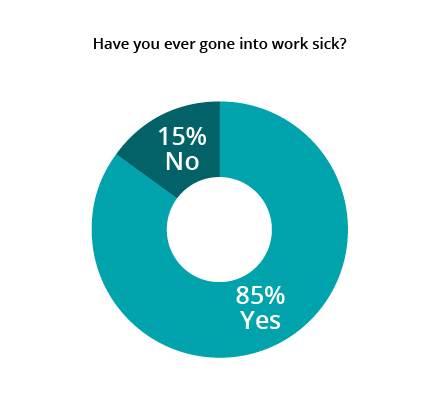 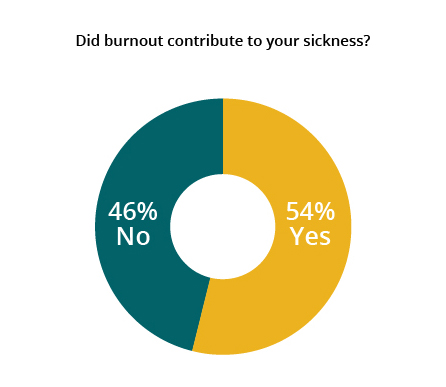 Not only does nurse burnout affect their personal health (20 percent), it also impacts their relationships with their families (19 percent) and job satisfaction (24 percent). 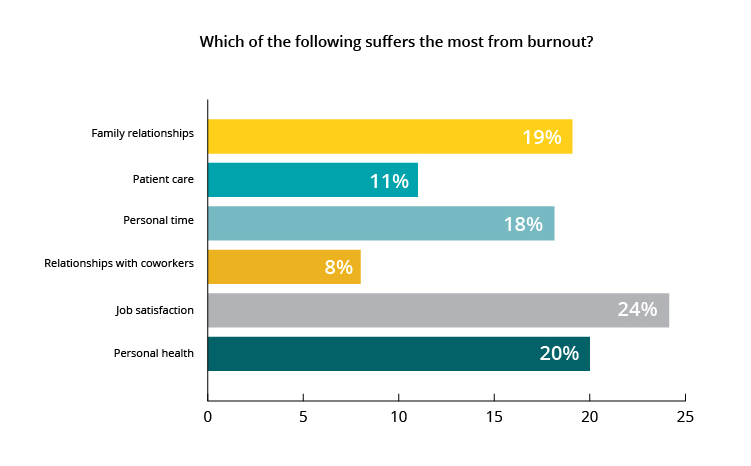 To cope with burnout, nurses are turning to exercise (13 percent), food (12 percent), and caffeine (13 percent) as well as spending more time with family (19 percent) and taking time off (17 percent).  Temporary staffing (travel nurses) is also a viable way to address nurse burnout and workload issues, according to 59 percent of respondents. 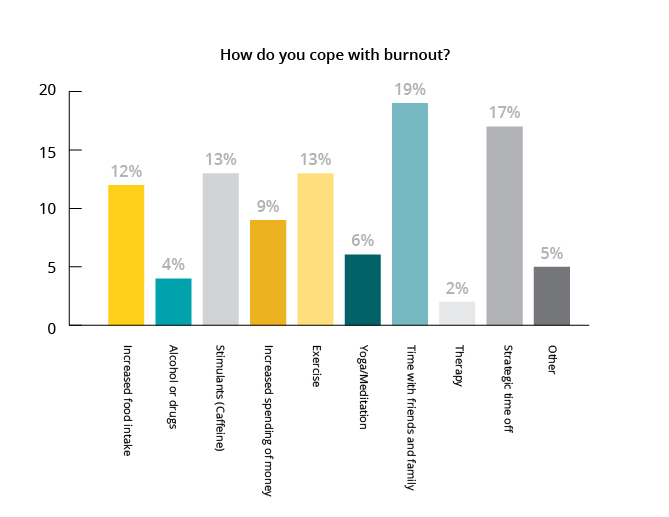 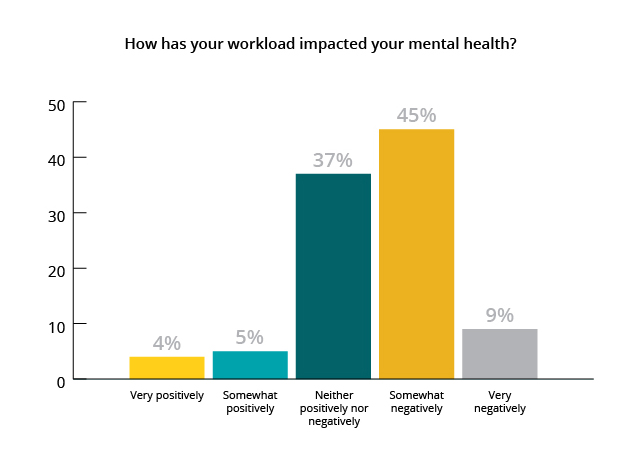 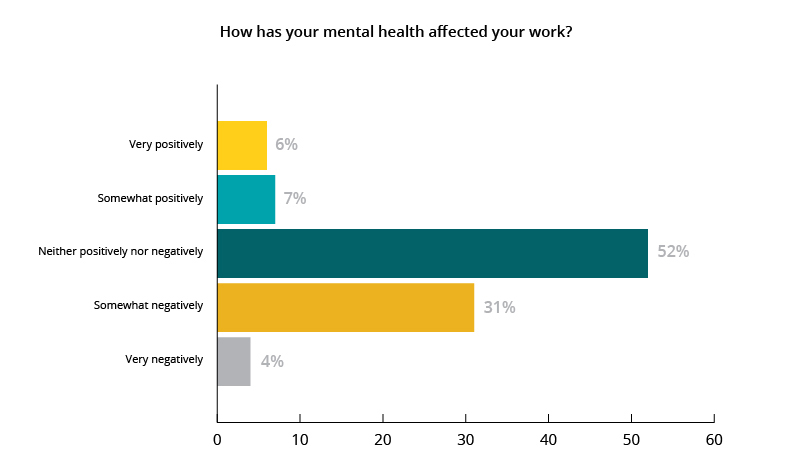 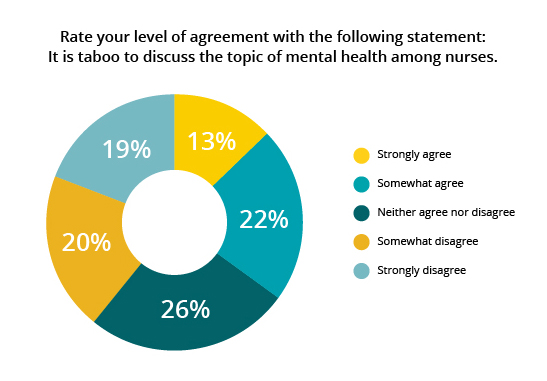 RNnetwork polled more than 900 nurses working in the United States for insight into modern opinions and attitudes about nurse burnout, work-life balance, mental health and harassment in the workplace. Nurses who received the email survey represented most fields and specialties, and the majority of respondents had 10 or more years of active practice. 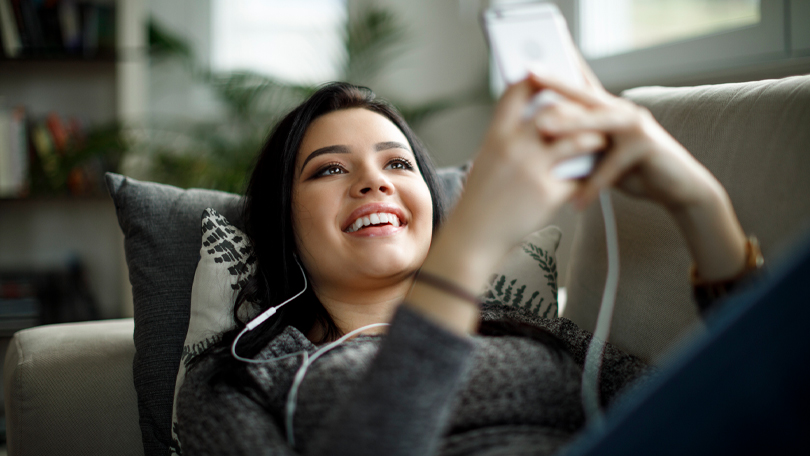 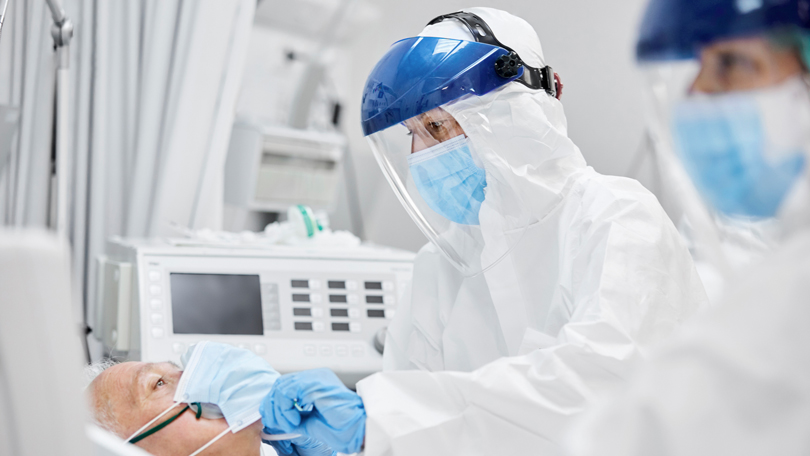 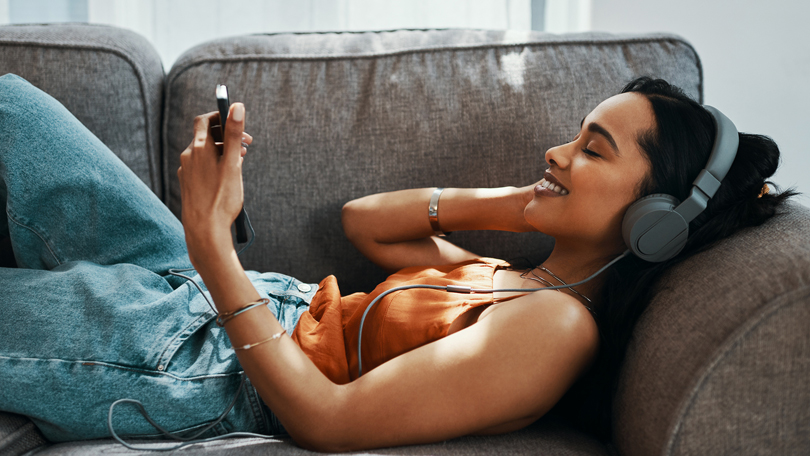 Liz Cornwall is a public relations specialist and is passionate about the company’s Putting People First culture. Prior to joining RNnetwork, Liz worked in advertising and marketing and also helped launch a pet magazine in Salt Lake City.

✨GIVEAWAY✨ Only a few more days to enter to w

💛GIVEAWAY💛 Your devotion and strength is in

May is Mental Health Awareness Month, and what bet

Find your new favorite hiking trail or enjoy a loc

Do you have a favorite travel assignment that you

Joey and Brent turned travel nursing into the ulti

Enjoy a sunset on the beach during your travel ass

While you're taking care of others, our team is he